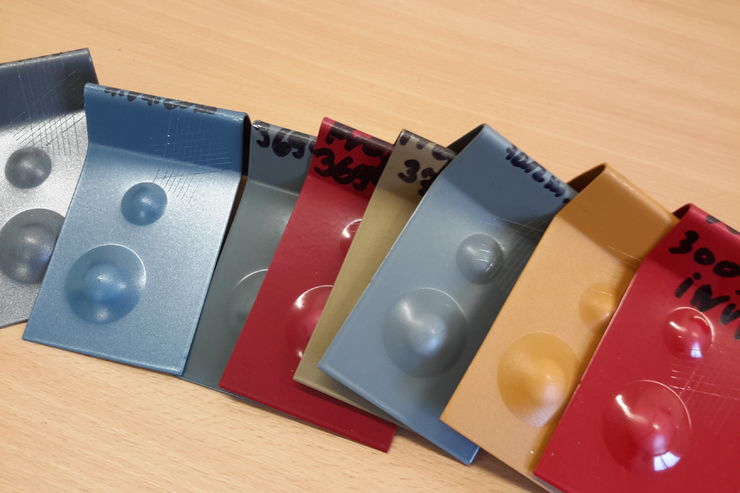 Cooking tests and mechanical tests are carried out with every colour change in the Südpfalz metal coating.
©Henkel/Metallbeschichtung Südpfalz

Changing from chromating to a classical chromium-free conversion process usually requires an adjustment of the system, especially if the lines are short and there is not enough rinsing capacity. Metallbeschichtung Südpfalz has succeeded in converting its 3-zone system without conversion by means of a new process. The system originally consisted of three zones - degreasing, yellow chromating and three VE rinses. Between conversion and degreasing there were two rinses, which were also located in the same chamber as the acid pickling. In order to significantly reduce the carry-over of the pickling solution into these sinks for the chromium-free process, flap seals and valves were replaced, quick draining was installed and the overflow was operated with deionised water instead of municipal water. The conductivity of these sinks could thus be reduced to below 1.8 mS/cm. In order to further improve the rinsing quality and to avoid drying, the outlet spray rings were reactivated. The aforementioned measures resulted in so little stain being carried over into the conversion that resharpening is possible via automatic conductivity-controlled dosing. The two components of the degreasing process are also added automatically. A uniform resharpening over the entire production time avoids temporary concentration peaks, which has a positive effect on the stability of the entire production process. This also simplifies the operation of the system. At the same time, the times in the chamber cycle system were continuously optimized and finally reduced by 19 percent.

Henkel's chromium-free conversion process allows virtually any chromating line to be converted in the following way without changing the water circuits: After thorough cleaning of the system, only the chromating in the former chromating tank had to be replaced by the Bonderite M-NT 2040 R2 process. As with chromating, this product does not require extremely low conductance values before conversion. The active bath itself is so acidic that, like a green chromate, it also has decapitating properties. When switching from green chromate lines with alkaline pickling degreasing as the only pre-treatment, it is therefore not necessary to switch to acid pickling. In extreme cases, the medium can even be used together with surfactant as a pickling degreaser and then run directly into a bath with the same medium as conversion without an intermediate rinse. In addition, the process with Bonderite M-NT 2040 R2 is more robust against germs than conventional processes, partly due to the low pH value of the conversion. The conversion process developed by Henkel has, in addition to the above-mentioned properties, the approvals of GSB and Qualicoat and was therefore the optimum choice for converting the horizontal line at Metallbeschichtung Südpfalz without major conversions. Since the beginning of 2017, the company has been approved for this process by GSB, Qualicoat and a well-known German system manufacturer.